Cabbages are an extended family, the vast majority of which are part of the Brassicaceae or Brassicaceae group. They make up a large number of very different species, among which flower cabbages, leaf cabbages and even root cabbages can be distinguished, depending on the part of the plant we consume. Although some of them are known for their sometimes unpleasant smell when cooked, they are a very beneficial and healthy food.

If you want to learn more about the best cabbage varieties to grow in your garden, join us in this curious article in which you will see different types of cabbages, their names and characteristics.

As a summary, this is a list of the names of the types of cabbage that we will explain later: 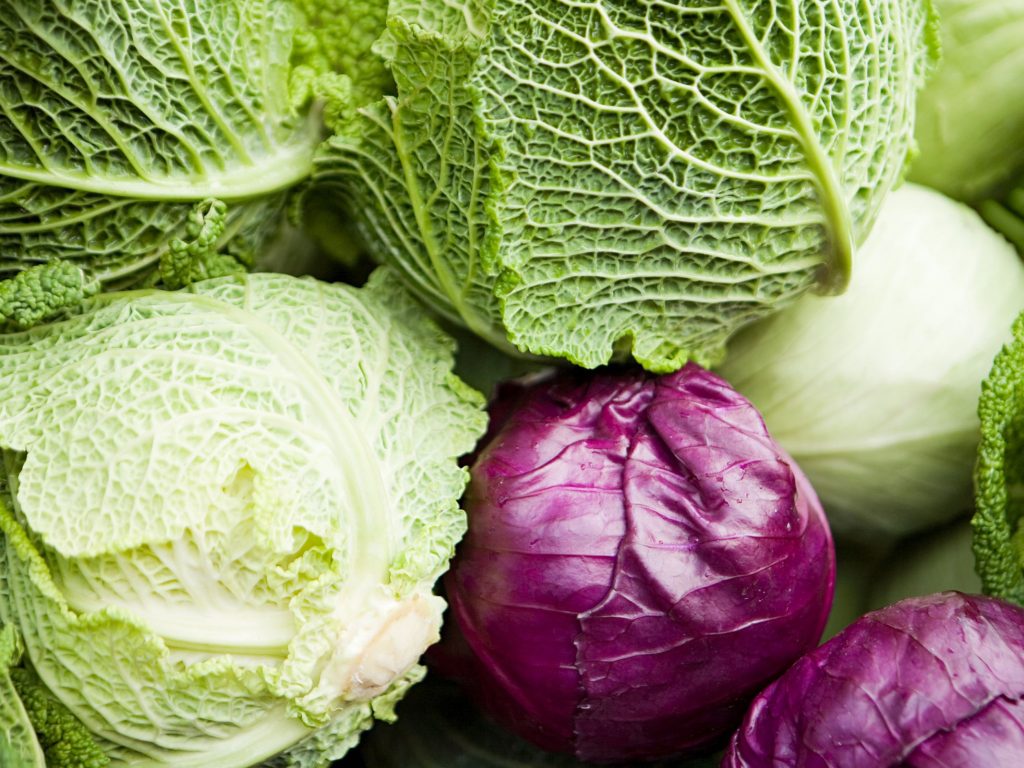 Kale is one of the most popular types of kale today. Until relatively recently this variety was used mainly for animal feed, but today it is included in many dishes and diets, especially detox or vegan. It is low in calories and rich in minerals.

The bok choy cabbage, or also known as Chinese cabbage, is a variety that has its origin in the East and is spreading more and more in western cuisine. Its expansion is especially active in northern Europe, as the bok choy withstands low temperatures very well.

The cabbage is very characteristic for its purple. This is one of the cabbage varieties richest in antioxidants and is very beneficial for the health of the eyes. It is common to consume it in salads and also in the elaboration of some recipes with a sweet and sour flavour.

Cabbages of this type are leafy cabbages that give rise to high-density closed buds. There are cabbages of different types, such as those with curly leaves, those from Milan or white cabbage. They can be eaten both cooked and raw in a salad and it is common to keep them in vinegar or fermented. As with many vegetables, the nutritional qualities of cabbages are best exploited in raw.

The collards cabbage or kale originated in the Mediterranean and includes different varieties of cabbage heads are not closed, as with cabbage. It is consumed a lot in southern Europe, and they are used to consuming boiled, sauteed or braised. Its nutrients are best exploited by steaming gently. They are low in calories and rich in vitamins and minerals.

The Brussels sprouts are a variety that is mainly consumed their buds, small and compact. It is a food widely used in diets and weight loss processes, since its caloric content is only 45 kcal per 100 grams, and instead it does provide a large number of mineral salts and vitamins to the body. Its optimal consumption is cooked in stews, in combination with other legumes or vegetables, or as an accompaniment to baked fish.

What is consumed from cauliflower is its large, white, fleshy inflorescence, which needs to be boiled or cooked in some other way, although its tender green shoots can be eaten raw. Its characteristics and texture make it a great ingredient in conjunction with soups or creams, such as bechamel.

Broccoli is another flower cabbage, although it is clearly distinguished from cauliflower by the markedly green tone of its inflorescence, especially at the ends of the flowers. Its usual consumption is both raw, boiled or steamed, although an excess of heat in its preparation eliminates a good part of its beneficial components. It is intense in flavour and is often combined with sauces or purees. It is considered a superfood.

Another flower cabbage that is halfway between the two mentioned above. The Romanesco al combines features of both cauliflower as broccoli inflorescences and noted for its particular shape of fractal geometry. It is very popular in the making of salads or to give a decorative touch to some dishes.

The bimi cabbage is a hybrid variety of cabbage emerging and can even cost you to find in some supermarkets. It was developed in the 90s in Japan and stands out for its high concentration of nutrients, dietary fibre, protein and mineral salts, superior to those of other cabbages.

It is also a type of cabbage with a somewhat strange name. It is one of the cabbages considered as roots and that occurs by a cross between turnips and cabbages and there are white and purple ones. The rutabaga or nabicol is a difficult product to digest the high percentage of fibre it contains but is incorporated into countless recipes for its distinctive taste, especially in stews and soups.

Do you wish you knew more about the plumbing in your house? All those pipes and valves can seem a complete mystery! Plumbing refers to anything to do with the pipes, fittings, drains and valves that provide water and heating in our homes. It is one of the most vital systems in the home and […]

Last week, I was painting on dark walls in my home. I liked this dark green color, but after 8 years, I wanted to see a change. I chose a lighter and brighter color. I knew that when painting on a dark color with the much lighter paint, I should take another step in the painting […]

In the last eight years, the economy has crawled its way out of recession and has steadily built a path to financial independence for many people. Many of those who have struggled their way through the last ten years is finally able to become homeowners. Some decide to buy and others to have a home […]

How to Get Into Football for Beginners

Why Is Rubber Such A Useful Material?

Posted on May 27, 2021 Author SideMagazineAdmin