Common ravens (Corvus corax) eat small animals, insects, carrion, and some vegetation. Crows are known to be scavengers, often fed by the prey of other animals or animals killed by vehicles; in other words, they clean up what is left behind by other animals.

The stomach contents of ravens have shown that mammals make up the bulk of their diet, even though they ingest large numbers of birds and reptiles. When it comes to greenery, crows eat grains and fruits, and flowers. They also eat eggs, young from other animals, and even placentas. Crows often look for food in places such as landfills.

On the carnivorous side, crows feed on small insects, earthworms, worms, spiders, amphibians (toads and frogs), small reptiles (snakes and lizards), small mammals (mice, rats, shrews, rabbits), birds (their young and eggs) and carrion (dead animals). They also eat fish, shellfish, and crustaceans when they live on the beaches.

In addition, crows can consume the undigested parts of animal droppings and human food residues. The placenta of cattle grazing in the mountains is also popular with crows. 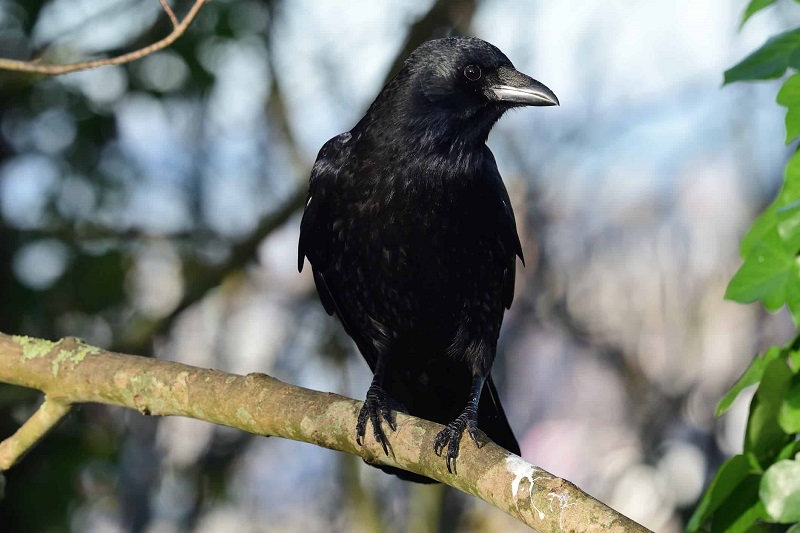 Crows are large birds, which preferably inhabit coastally or forest areas near bodies of water. They have a sturdy body, small head, thick neck, long curved bill, strong legs, long fan-shaped tail, and long, narrow wings. Their plumage is jet black, with iridescent, bluish, and purple reflections. They measure between 50 and 70 cm in length and their weight varies between 3.7 and 1.7 kg.

They are gregarious animals that often live in groups of two to six individuals. They remain with the same partner throughout their life and generally live in the same territory, defending it from their other congeners. They build their nests in high places such as treetops, ledges of rocks, or, more frequently, on old buildings or utility poles. Their nest is cup-shaped and made up of branches, roots, mud, and bark.

Crows are timid and fearful birds but, if they live near urban centers, they adapt easily to humans. They can even be easily domesticated. They are very intelligent and their talent for imitating sounds and even human voices is well established. They generally live 10 to 15 years in the wild and, in captivity, their life expectancy is around 13 years.

The word swan is the most common term with which a type of anseriform birds that belong to the Anatidae family are cataloged. These animals, like ducks, are aquatic birds but differ from the rest due to their large size and long neck. Most of the species that make up this type of bird belonging […]

White boots: how to choose and match them

White boots are a spring evergreen that is impossible to resist! We give you some tips to combine them.

The dining room can be defined, together with the kitchen and the living room, the fulcrum of Italian homes. It is considered the symbol of conviviality, sharing, and hospitality and, also, for this reason. This must be welcoming, functional, and reflect not only the style of the entire house. But also the character of the […]

How to cook red currant jelly

5 most beautifuland largest zoos in Europe

Best Low Back Exercises Orthopedic That Will Make You Fit