Traveling to other countries always raises some concerns for tourists. All tourists need to be concerned about food safety, hospital care standards, cleanliness of the water, and numerous potential illnesses. In this article, we will present the tips and best time to travel to Egypt.

Best time to travel to egypt

First of all, you should note that there are roughly two favorable periods for traveling to Egypt. The first runs from March to May, and the second from September to November. Of course, avoiding the summer months is more than reasonable, due to the desert heat. Similarly, winter is discouraged because temperatures drop considerably at night. 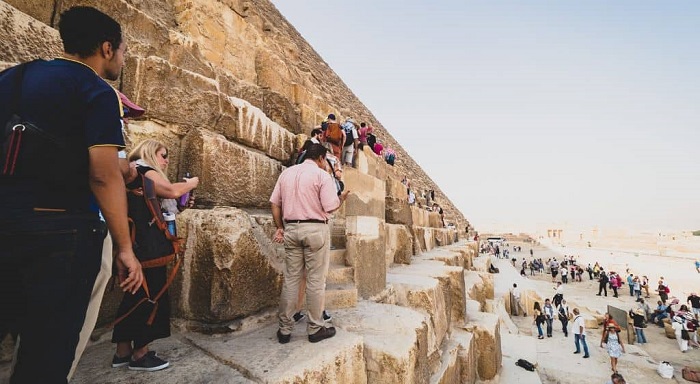 On the other hand, the climate of this country located in Northeast Africa is subtropical. Summers are very hot and dry, while winters are generally mild. The hottest months are from the end of May to the beginning of September. Of course, there are clear differences between the coastal and inland regions.

On the coast, temperatures are more moderate, with minimums of 14ºC and maximums of 37ºC. In the interior, where the desert is the protagonist, the minimum temperature can drop during the night to 0ºC, while, during the day, it reaches 46ºC.

The whole of Egypt is included within the bioclimatic landscape of the desert. However, up to nine different ecoregions can be distinguished in the country. From the Mediterranean steppes and forests west of the Nile to the brackish of the Sahara desert. These diverse climatic characteristics shape the temperatures of each region marking some differences.

Tips for traveling to Egypt

The most important fact about Egypt is that tap water should not be consumed because it contains chlorine in large quantities. It might be safe for those who have become accustomed to it after spending a significant amount of time in Egypt. If a person is not used to tap water, he or she may experience some problems, but that does not mean that the water is contaminated.

Tap water can be used for showering and brushing teeth, but it is highly recommended to drink bottled water during visits to Egypt. Egypt is known for numerous sensational varieties of fresh vegetables and fruits, but they should only be consumed if they have been properly washed. It is safe to consume them in better hotels and cruises, but it is not a good idea to do it in cheap places. Falafel is a good and tasty type of food that is relatively low in price and in most cases is completely safe.

Cruise ships can sometimes cause diarrhea for many different reasons. Most people think it is from food or water, but none of them cause diarrhea on cruise ships. The main reason is overeating, which generally happens to most passengers on the cruise. Cab air conditioning can be very harmful in certain respects and can cause numerous ailments such as vomiting, illness, diarrhea and dehydration due to a compromised immune system.

It is highly recommended to acclimatize before entering air-conditioned cabins. It is advisable to avoid excessive exposure to extreme cold or extreme heat. Another suggestion is to treat the stomach as if it were staying at home, because sudden changes in diet can be harmful. Hands should be washed before each meal.

Wet wipes can be a great help in such situations where there is no bathroom nearby. Certain types of antibiotics can be used to alleviate the symptoms of diarrhea. Some people take antimalarial tablets, but that doesn’t make any sense because there is no malaria in Egypt. Those medications can only be harmful due to certain side effects. Mosquito repellents are very efficient at minimizing the nuisance factor that is generally associated with these insects.

From the white-sand shoreline of Cape Cod Bay to the cliffs of Martha’s Vineyard, Massachusetts’ beaches are nothing short of jaw-dropping. There are beaches that adapt to the experience you enjoy the most; some are lined with restaurants and bars, others are more secluded and natural, with towering sand dunes to explore. The beaches are […]

Without a doubt, Sydney is the first city you think of when thinking of Australia. So much so that many believe it is the capital of the country. No, the capital is Canberra, neither Melbourne nor Brisbane nor Sydney. What is clear is that on a trip to Australia Sydney can not miss. We spent […]

The view from Gloucestershire Park Homes is that of the rolling green hills of the county. Gloucestershire is an area of the country where the landscapes have retained their old English feel, with many quaint villages looking just like something out of Downton Abbey. If you are lucky to live in the area or perhaps […]

Some benefits of carrying children

Historic Gates Around the World

Music and Money, can you remember these numerical tunes