Plants can provide a connection to nature, and in the workplace, the positive effects have been proven by many scientific studies. The benefits can help both employees and employers. 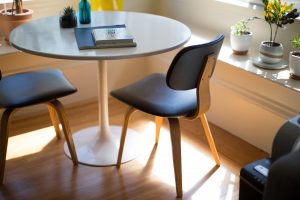 Research by the University of Exeter in 2014 found productivity increases by 15% when a workplace previously low on greenery has only a few houseplants added, as discussed in this article from The Guardian. The data showed a plant per square metre led to employees scoring higher on basic tests including memory retention.

Results from the study in 2010 from the University of Technology, Sydney showed introducing plants to a workplace significantly reduced stress levels amongst employees. The study in question was a small sample but found adding a single plant to an office can have a big impact on depression levels, fatigue, anxiety and cause drops in levels of hostility. 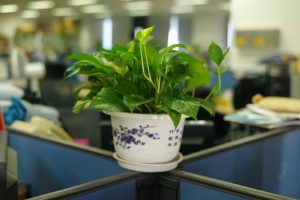 We know plants absorb carbon dioxide and release oxygen, which humans require to survive, but in the 1980s NASA scientists also found plants actually clean the air, removing chemicals from surroundings. In addition, the Plants and Indoor Environmental Quality Research Group at the University of Technology, Sydney, has found having plants indoors reduces the carbon dioxide levels in air-conditioned buildings by approximately ten percent or up to 25% in offices without air conditioning.

Plants can even absorb sound, thereby reducing distraction from increased noise levels. According to London South Bank University research in 1995, this is particularly effective when larger pots are placed around the edges of a room. This would be a simple improvement to any office but it is worth considering working with office fit out companies to incorporate greenery throughout the space. Plants can clearly make a huge difference for workers so get your office fitted out with Mobius at work.

The Agricultural University of Norway conducted a small scale study in the 1990s, which found plants being introduced to an office led to a decrease in symptoms of illness of 25%. More recently, the 2015 Human Spaces report looked at 7,600 office staff situated across 16 countries. The data revealed 58% of workers do not have plants in their offices, but amongst those with greenery, there was an increase of 15% in wellbeing scores and 6% higher productivity levels.a

Sex trafficking is still a major problem around the world. Traffickers use fear and intimidation to kidnap victims and force them into sexual situations to make money for the trafficker. In many situations, it is hard to combat because people involved in sex trafficking are secretive hard to track down. Whether this is happening in […]

Recycling is one of the best things that you can do for the world, and recently there have been tips and advice everywhere to tell us all how we can be better at recycling, and companies that can help us with it such as polystyrene recycling uk company https://www.printwaste.co.uk/business-recycling-solutions/polystyrene-recycling/  But when it comes to bereavement […]

Build to rent property builds on the rise

How to Paint a Gate? Do It Yourself by Following These Tricks

8 tips to choose the photographer for your wedding

Does vitamin e make you fat? Get the answer in details