Those who work in sculpture love to use bronze if they can. It is a strong alloy that resists rusting and damage unlike marble which can be brittle. It is a preferred material by www.gillparker.com/ for creating a Bronze Horse Sculpture There are a multitude of fine examples of the use of bronze but one of the most famous, although it was not originally set in bronze, is the statue of The Thinker. This is one of the many achievements of the French artist Rodin and it is a central part of a wider work set. The Thinker sits at the gates of hell in a piece created by Rodin based on Dante’s Divine Comedy. It is a nude figure, sat with its left-hand draped over its left knee and the right arm rest on the thigh of the left leg and the clenched right hand is supporting the head being placed under the chin. The face of the figure is contemplative and thoughtful; although Rodin originally wanted to name it “The Poet”, the bronze foundry workers named it “The Thinker” due to its likeness to a Michelangelo work. As Rodin wanted to show an influence from the great Italian master he was more than happy to use this new name.

The statue was originally in plaster and finished in 1881 but for longevity a mould was made for it to be cast into bronze for its final resting place as part of the Gates of Hell door surround. It is not sure as to what the thinker is actually thinking about. Is he pondering his own entrance to Hell? Is he trying to decide what to do or is he reflecting his actions in life that has lead him here. One thing that is clear it is not Dante himself as he keeps his clothes on throughout his descent into Hell and up to Heaven. 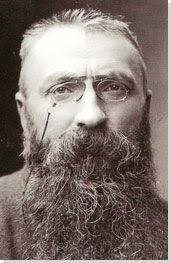 To date 28 Thinkers are placed at points around the world with the original bronze casting for 1904 placed outside the Musee Rodin in Paris. Not all of the subsequent casts were done in Rodins lifetime, and the only other cast made from the original mould is in Louisville in the USA, but the majesty of the piece remains undiminished and it is used in many contexts to symbolise the disciplines of Psychology and Philosophy and the human condition in general.

Have you ever wondered what welding is or how it works? Welding is a unique process that helps combine two or more components with the help of heat and pressure. Welding supports the economy and makes it possible for beautiful structures and important vehicles to stay together. If you’re new to welding, here’s what you […]

Who was St Patrick?